On 15 November, EIF organised a Preparatory meeting in view of the Internet Governance Forum taking place in Ethiopia from 28 November to 2 December 2022. The meeting, chaired by MEP Miapetra Kumpula-Natri, brought together Internet Governance experts to discuss how the Internet can be resilient for a shared, sustainable and common future: 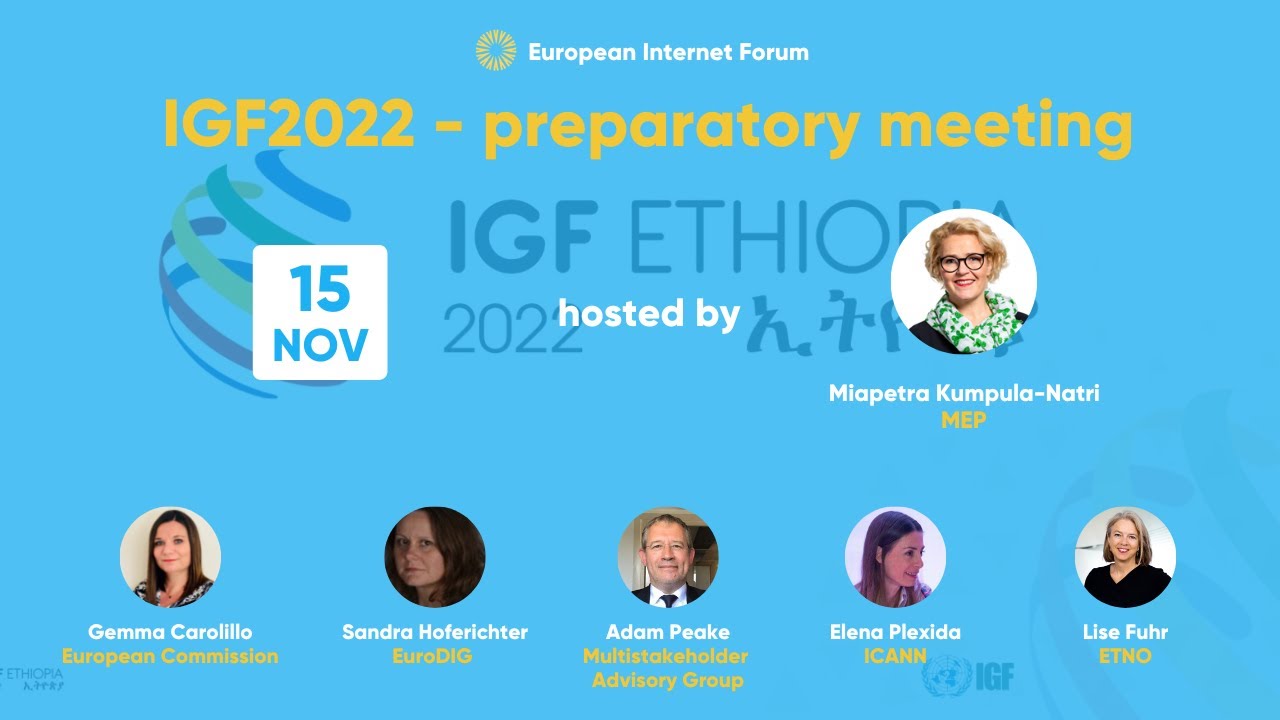 MEP Miapetra Kumpula-Natri highlighted that Internet is crucial in everyday life, for businesses, individuals, women and young generations. The upcoming Internet Governance Forum will be an opportunity for the delegation of ten MEPs with different backgrounds to meet all the stakeholders that create the Internet. In the context of the Parliamentary Track, there will be also a separate meeting with parliamentarians from Africa. She affirmed that the Global South has been vocal on bringing values back to the Internet. In conclusion, MEP Kumpula-Natri stressed that IGF will be extremely valuable looking at the Global Digital Compact (GDC) that the UN Secretary General has proposed.

The European Commission representative, Gemma Carolillo, underlined how the topic of the upcoming IGF is aligned to the mission that the UN has foreseen for the Global Digital Compact. Ms. Carolillo dived into the approach towards digital transformation adopted by the European Commission, which has put forward the Declaration on digital rights and principles. She touched upon three themes of the IGF programme. ‘Internet fragmentation’ must be avoided at all levels; an open Internet brings prosperity and autonomy to digitising countries. With regard to ‘Governing data and protecting privacy’, the GDPR is a cornerstone for personal data protection in the EU and has triggered a global debate on data protection. In ‘Addressing advanced technologies’, artificial intelligence is at the top of the list. The proposed Artificial Intelligence Act defines human-centered norms to ensure that the approach to AI is based on trust without hampering innovation. By joining IGF, the Commission demonstrates its strong support for the multi-stakeholder principles addressing the governance of the Internet.

Sandra Hoferichter, from EuroDIG, cited the Our Common Agenda report, released by the UN Secretary-General in September 2021. The Common Agenda proposes a Global Digital Compact to be agreed in September 2023 through a technology track encompassing different types of stakeholders. Furthermore, the Office of the Secretary-General’s Envoy on Technology has opened a public platform in which inputs on the GDC can be submitted by 31 December 2022. She affirmed that EuroDIG – through the EuroDIG Commenting Platform – invites European stakeholders to contribute to the preparation of a submission on the GDC. This process needs to be open, in order to identify a common ground in terms of principles and proposed actions relating to the seven thematic areas mentioned in Our Common Agenda. An additional point has been added to invite submitters in proposing other areas. In the end, she stressed the relevance of having different stakeholders in this preparatory meeting to discuss core issues which are part of the Global Digital Compact.

Adam Peake recognised the value of the IGF, which is “a forum for dialogue among all stakeholders”, and “will never be a negotiating forum”. He emphasised the formalisation of new types of mechanisms that provide input to and guide the IGF, for instance the Leadership Panel and the development of policy networks with a number of working groups. As part of the Multistakeholder Advisory Group (MAG), he declared that Internet fragmentation, one of the five themes of the IGF programme, can be considered a technical layer fragmentation, but also from the user experience perspective. In addition, he mentioned the various frameworks, principles, norms around artificial intelligence. IGF will offer a package of good practices and norms that are common principles, so that the heads of state can have a starting point in their discussions and further consultations. Mr. Peake concluded by underlining that the Parliamentarian session will be held by a new group of African parliamentarians.

Elena Plexida, from ICANN, focused on the Internet fragmentation from the perspective of technical organizations that help maintain the Internet by providing interoperability. There is one Internet because different networks and devices connected use the same set of identifiers – the DNS, the IP addresses, the protocols. Internet fragmentation is the lack of interoperability among different networks. Nowadays, there is no Internet fragmentation at a technical level, even though there are tensions among international actors in Internet governance. This could break the trust since the Internet and its governance are based on it. She acknowledged that it is critical to continue building trust in one Internet, including the Global South, but this should imply the use of multiple languages. Assuming that English is not spoken everywhere, Ms. Plexida underlined that the Domain Name System (DNS) should be in different scripts. The handle system or blockchain-based naming systems can be considered as alternatives to the DNS.

Lise Fuhr, from ETNO, recognised the importance of promoting IGF, supporting stakeholder engagement and fundraising activities. What is more, it is fundamental to exchange with other stakeholders and relevant bodies: from governments and official representatives to the private sector, civil society and the technical community. IGF needs to be more inclusive, and this does not mean only involving the Global South. This term can be applied to IGF, with the aim to engage other sectors and groups which are depending more than ever on digital technologies. For instance, banking, energy, manufacturing, transport, logistics are not fully engaged in IGF. Ms. Fuhr declared that “it would be good to try and see what new creative approaches could be found to ensure that IGF outputs are meaningful and impactful”. In conclusion, she suggested that the Leadership Panel, of which she is the member for the Technical Community, should look more into the governance structure, but also considering how to engage more people and make it more impactful.