On 17 May EIF organised a debate, hosted by MEPs Pilar del Castillo and Miapetra Kumpula-Natri, on the EU-US Trade and Tech Council (TTC) with an overview of the second TTC summit and a focus on the importance of EU-US cooperation and technology in the Ukraine - Russia war. The MEPs were joined by the following guest speakers: 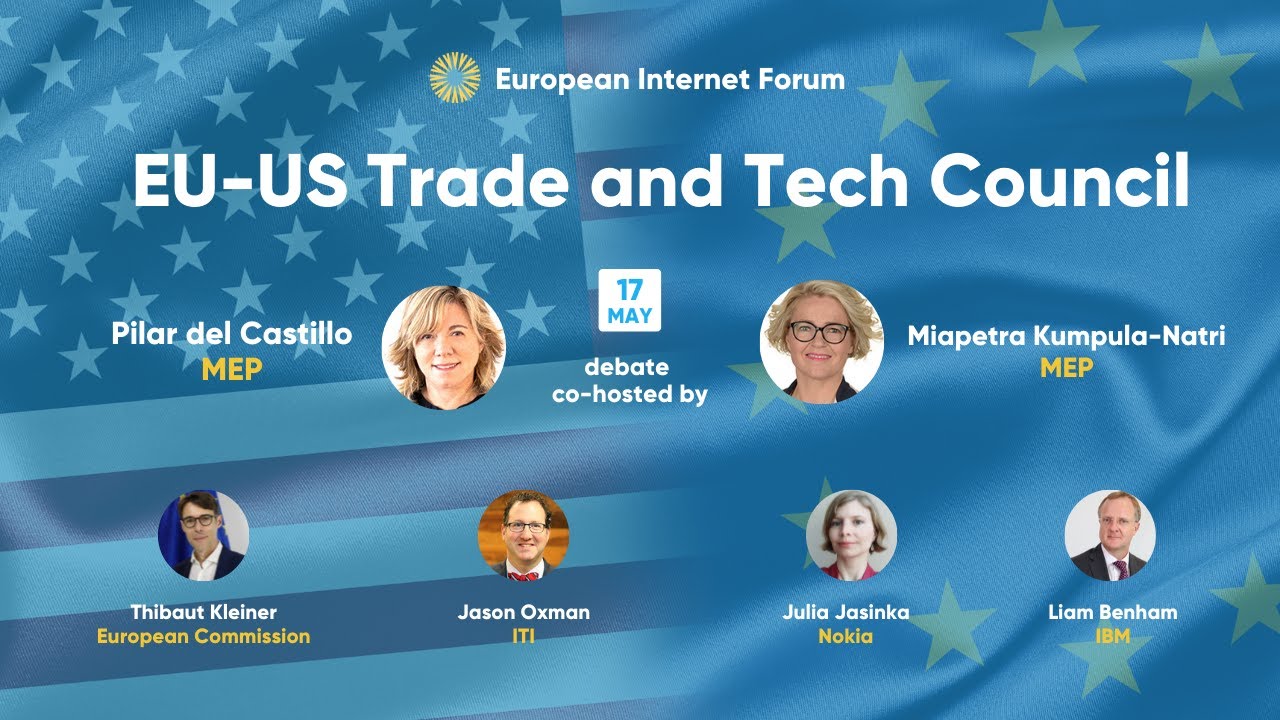 MEP Pilar del Castillo set the scene highlighting the relevance of the EU-US Trade and Tech Technology Council launched in September 2021. After mentioning the war in Ukraine, MEP del Castillo defined this Transatlantic cooperation as an indispensable instrument for fostering the level of cooperation on export controls and sanctions. Furthermore, the EU-US cooperation has been reinforced in critical areas in terms of growth and competitiveness. According to her, the most tangible examples of the TTC as a solid cooperation mechanism are: first, the creation of the artificial intelligence subgroup; second, a strategic standardisation information mechanism; third, the commitment to develop a common analytical framework for identifying foreign information manipulation. She concluded her speech by highlighting that a closer cooperation on data will bring substantial economic benefits, set global standards and retain technological leadership.

MEP Miapetra Kumpula-Natri started her speech by underlining that trust plays a pivotal role in developing trade amongst countries and steering the technology of the future. The political trust - also influenced by external factors - has changed rapidly. However, according to MEP Kumpula-Natri, companies have the ability to be more secure on their production times, capacities, and possibilities, but, in general, there is a need to work more closely with like-minded countries. She declared that trade fights should be replaced by free trade and free possibilities for both EU and US. The MEP affirmed that digitalisation could not happen without physical goods. For instance, the Chips Act is a testimony of the fact that products of industry and supply chains are still needed. In the end, she provided a definition of cooperation, which is not taking away the autonomy, but increasing it and favoring broader contracts at a global level.

The European Commission representative, Thibaut Kleiner, provided an overview of the second EU-US Trade and Technology Council (TTC) meeting that had taken place the day before (16 May) in Paris and underlined the achievements since the first TTC meeting in Pittsburgh in September 2021. According to him, the first meeting showed that the transatlantic relationship is alive. He defined TTC as a sort of brand that needs to be more publicised for its concrete existence in terms of links, structural elements and values. For instance, regarding the Russian aggression to Ukraine, TTC enabled both EU and US to quickly coordinate sanctions. Mr. Kleiner also mentioned the protocol adopted in Paris, underlining that the TTC does not interfere with the EU legislative process and has the potential to mobilise the private sector and other stakeholders. Finally, he highlighted the need of preparing standardisation around AI. Mr. Kleiner defined the TTC meeting in Paris a turning point and an opportunity to develop concrete projects, with the cooperation of private companies, parliaments, lawmakers and partners.

Jason Oxman, expressed his optimism about the direction of the TTC and pointed out that “the EU-US relationship has never been stronger, inspired in large part by the actions of Russia in Ukraine”. Mr. Oxman underlined the role of technology in bringing people together through its services and products, even across the Atlantic. It is fundamental to align policies between EU and US, in order to recognise and reinforce the shared values. According to him, a focus on technology standards at international level is needed to operate in a way that endorses, reinforces and encourages voluntary industry standards. As a result, technology can operate for the benefit of consumers and businesses on both sides of the Atlantic. Other important aspects are: the transatlantic exchange of data and the free flow of data, but also digital services on both sides of the Atlantic. According to him, what emerged from the second TTC meeting in Paris is the necessity to ensure that the free flow of data, goods and services is not interfered by countries that aim to impose unilateral rules and regulations in contrast with international trade.

Julia Jasinska affirmed that Nokia is a great supporter of the EU-US collaboration and that is encouraging that both EU and US recognise digitalisation as critical for the competitiveness and sustainable future of the economies. She defined the EU-US collaboration as future-oriented. Firstly, it is fundamental that EU and US markets are open for companies from both sides of the Atlantic, enabling also public procurement and access to R&D support. Secondly, the TTC does not replace separate regulations and legislations, but the goal is to be aligned, for instance in terms of mutual risk assessment. Thirdly, the necessity of a global focus in the area of standardisation in order to reinforce global standardisation, the spreading of the benefits of sustainable digitalisation around the world with an offer to the Global South. She concluded by stating that there are already multilateral institutions in several of the areas where the TTC working groups have been created.

Liam Benham recognised that the war in Ukraine was one of the main focus in the second TTC meeting and that the post WWII order cannot be taken for granted anymore. As representative of IBM, he expected that the TTC will drive technological innovation, economic growth and job creation, but he also welcomed the TTC focus on critical emerging technologies, for instance the creation of the subgroup about Artificial Intelligence that will deepen collaboration on how to develop and use AI. Beyond economics, important aspects to be considered are: trust and resilience in the digital economy and solutions for the energy transition. Generally, EU-US is a very large relationship, but there is the need to also include like-minded countries. He concluded his speech by declaring that the TTC should support some core principles: first, fair competition, reciprocal participation and openness in both markets because these are shared values between the US and the EU; second, transatlantic data transfers.