On the 9th November, EIF organised a debate hosted by MEP Ondřej Kovařík on Digital currencies with a focus on the digital euro and cryptocurrencies. The MEP was joined by the following guest speakers: 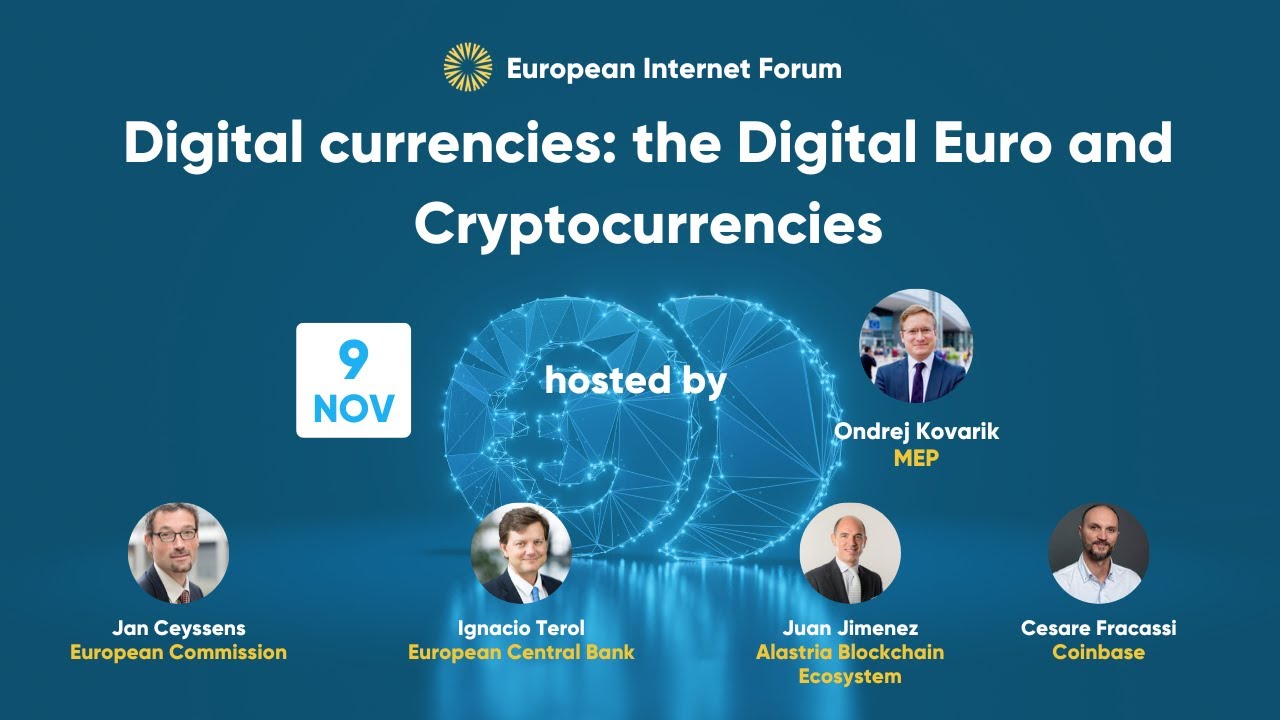 MEP Ondřej Kovařík set the scene declaring that the presence of digital currencies and digital assets in the global and European economy has been increasing. Most of these assets are issued and traded by private entities. Considering the proposal of a digital euro launched by the European Central Bank, MEP Kovařík focused on how public digital assets and digital currency can be adopted at European level and which benefits they can bring. The introduction of Central Bank Digital Currency (CBDC) would foster innovation and, for instance, enhance payment schemes based on this infrastructure as much as encourage European companies to introduce these payment schemes. According to him, the amount of cash circulating among European citizens is low and it would be close to zero at some point. He concluded his speech by affirming that the critical part of this process is to decide how the infrastructure will be designed and what the acceptance of European citizens and business will be.

Ignacio Terol highlighted that the European Central Bank has engaged with the European institutions and finance ministers as well as with market participants, including intermediaries, consumers and retailers. He declared that a digital euro should be issued because, from a historical perspective, “whether money took the form of various metals or paper money, public money has always adapted in its forms to people's preferences as to what was the prevailing means of exchange”. The model for payments has been hybrid for the last decades. Central banks have issued public money, essentially cash for individuals and have reserved accounts for banks. According to him, central banks should issue digital money for a number of reasons. People are increasingly paying digitally. It is fundamental to limit the reliance on foreign payment technologies: nowadays, two thirds of European card payment transactions are run by companies with headquarters outside the European Union. Last but not least, issuing a digital euro would safeguard people's confidence about the value of money, allowing them to convert private money into digital central bank money at par.

The European Commission representative, Jan Ceyssens, affirmed that the European Commission is preparing a legislative proposal which would enable the issuance of the digital euro. He listed the key points to consider in this process from a regulatory perspective. First, public money should remain relevant in the digital age, guaranteeing financial inclusion and considering that some parts of population cannot access digital means of payment. Second, the hybrid model – mentioned earlier by Mr Terol – has a strong role for private money. Private money is often the driver for innovation. Third, a huge part of payments and the financial management of citizens’ money is carried out by the private banking sector. Fourth, digital euro should also guarantee privacy while avoiding money laundering. In conclusion, he acknowledged that the digital euro is an ongoing process that would support the competitiveness of European economy and financial system.

Juan Jimenez declared that the digital euro is an opportunity to showcase how banks can collaborate in this process that adds value to all stakeholders in the European economy and society. He stressed the importance of the digital euro for four main reasons. To begin with, it should provide a real value to citizens – and banks could play a key role in bringing it closer to citizens, for instance, through the existing bank apps. Then, it is fundamental to guarantee privacy and cyber security, while ensuring AML (Anti Money Laundering) and other controls that must remain in place. In addition, the digital euro must be a real alternative to private stablecoins and other CBDCs and provide advanced capabilities for the private private sector to drive payments innovation, and to ensure that the digital euro is competitive future proof and drives payments innovation. Furthemore, an uncontrolled expansion of the of CBDCs as a form of savings or investments should be avoided, as it would challenge financial stability as well as banks capacity to finance the economy. He concluded by claiming that players and stakeholders are also looking at the digital euro as the opportunity to bring the promised efficiencies of using blockchain.

Cesare Fracassi pointed out that, in most of the countries analysed, card-based methods of payments in store are widely used, while cash-based methods are around 20-30%. He wondered what the objective of the digital euro is: it is hard to believe that it would replace cash or debit cards. Europe, unlike the US, has a good instant payment system. He then dived into the advantage of CBDCs over TIPS (Target Instant Payment Settlement). TIPS might be a possible technical solution for the digital euro. He also compared the tradeoffs among different forms of money: from physical currency to bank deposits, CBDCs and stablecoins. According to the table he showed, stablecoins – if well-regulated – would technically dominate CBDCs across a very large type of features. He even raised the question whether stablecoins can compete with CBDCs. MiCa regulation is quite restrictive in how people are going to use stablecoins in the future. In conclusion, apart from the benefits of CBDCs, he stressed that ‘it is also important to allow the flourishing of a very healthy euro denominated stablecoin’.