On 26 October, the European Internet Forum organised a reception – hosted by Pilar del Castillo MEP and EIF Chair – with Věra Jourová, the EC Vice-President for Values and Transparency, as guest of honour for an exchange of views on Disinformation and the EU response. 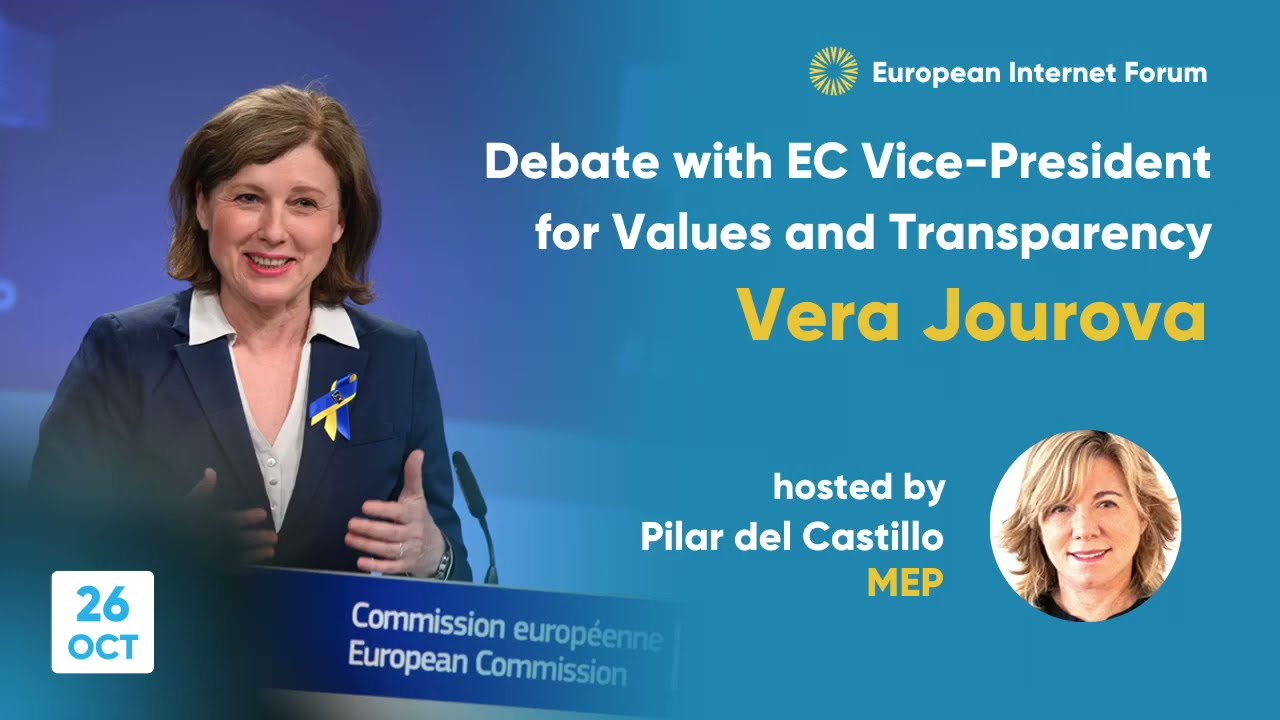 22:00
Debate with the EC Vice-President for Values and Transparency Vera Jourova

MEP Pilar del Castillo welcomed participants expressing her delight for being able to welcome Vice-President Věra Jourová at the European Internet Forum. MEP del Castillo highlighted the important role of the Vice-President in tackling disinformation, and mentioned her last achievement, ‘The 2022 Strengthened Code of Practice on Disinformation’, signed in June 2022, which brings together a wide range of stakeholders for more ambitious commitments in countering online disinformation.

Vice-President Věra Jourová opened her speech declaring that “disinformation is a company of human beings” and a poison impacting even the use of digital tools. She declared that the freedom of expression must be the basic principle in tackling disinformation, without forgetting the limits to the absolute freedom of speech in the EU. The European Commission is building a system which should mitigate the impact of disinformation on the already existing laws.

The Vice-President dived into some recent peaks of disinformation in Europe. After the annexation of Crimea, 40% of disinformation was about Ukraine and, according to her, this was when Russia started to prepare the ground for the invasion. She defined the war in Ukraine a ‘hybrid war’ – commenced in 2014 – through very well-targeted disinformation campaigns and cyber-attacks. During the Covid-19 pandemic, more space was exceptionally provided to the content coming from health authorities, to minimise or remove dangerous messages on how to get rid of Covid.

Vice-President Věra Jourová mentioned ‘The 2022 Strengthened Code of Practice on Disinformation’, which has involved digital actors with the ambition to demonetise the dissemination of disinformation. Big platforms have been requested to report qualitative data per country and per language to deeply understand the impact of disinformation on citizens. She acknowledged that citizens can be empowered to deal with disinformation: “People should be given the choice and there should be digital literacy, media literacy and education, and awareness-raising”.

In the end, she pointed out that there is no coincidental correlation between the decrease of trust to media and increase of impact of disinformation. The Media Freedom Act aims to create a better and safer environment and protect the media against the state interventions and spywares. Furthermore, touching upon the Digital Service Act, she explained that political advertising is not part of this ‘lex generalis’ because it requires stricter rules than selling products to consumers.