On the 25th of September, EIF hosted a cocktail reception in the European Parliament with the title ‘Gender in Tech’ chaired by Pilar del Castillo MEP and EIF Chair and by Elizabeth Crossick (RELX Group), EIF Board Member. 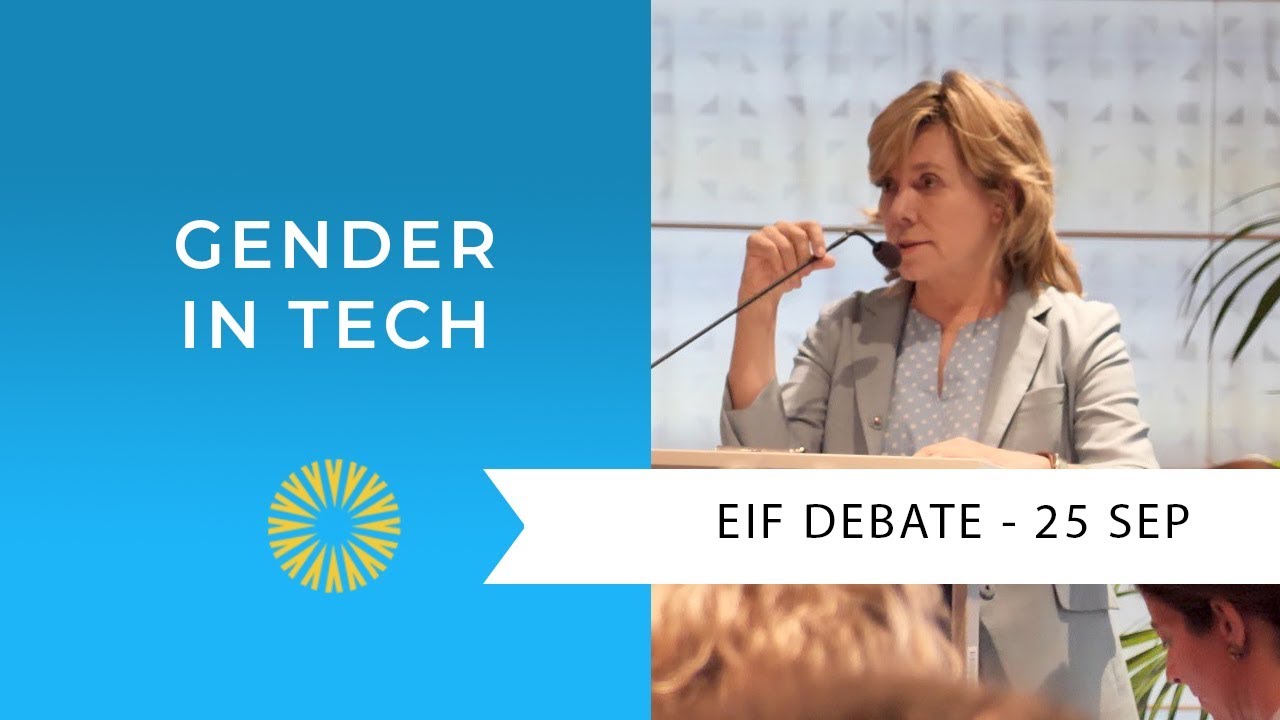 Pilar del Castillo MEP introduced the topic by highlighting that the gender gap is a business case, especially in STEM sectors. Ms. Del Castillo brought to the table worrying statistics on the decreasing number of people pursuing STEM studies in Europe and calls for immediate action: ‘the number of degrees in the case of women is even more worrisome. Today, the number of women following this type of studies is down below 2011” and “the proportion of men working in these sectors is three times higher”.

Lora Borissova, Head of EU Commissioner Gabriel’s Cabinet seconded MEP del Castillo’s views and brought forward the three pillars of the strategy that the European Commission has launched on ‘women in digital’: combating gender stereotypes, promoting STEM studies among girls and ways to encourage digital entrepreneurship for women. Moreover, Ms Borissova mentioned a few of the Commission’s initiatives: a European target for the participation of women in STEM studies that “would allow for an assessment of the situation in every single EU country” to be published parallel to the DESI (Digital Economy and Society Index); the Media Programme on Gender for 2018 through which the Commission tracks gender equality in all EU-funded programmes, the EU Code Week, which boasted over 1.2 million participants (out of which 46% were women), the European Digital Skills Award etc.

Our moderator Elizabeth Crossick, Head of Government Affairs at RELX Group asked the speakers about role models and their influence on the development of young professionals. Egle Nemeikstyte, CEO of Blockchain Centre Vilnius underlined the importance of mentors, especially at an early stage of one’s career, where there is need for encouragement: “Women need to have the courage to break the circles of men, to participate as equals in the discussions”. Ms Borissova added that parents and teachers also play an essential role, as first role models, in learning how to express and defend ideas. Melissa Rancourt, Chairman & Founder of Greenlight for Girls reinforced this idea while stressing that people also need to be attentive for key & serendipitous moments that can have a substantial impact on the course of their lives and careers. “I work in recruitment and 9 out of 10 interviewees are men” stated Caroline Chavier, Head of Talent Acquisition at Voodoo.io. She then offered an example of a potential solution to empower and encourage women to speak up: meet-ups, where women have the chance to talk to their peers and learn from each other.

MEP Del Castillo raised the labour flexibility aspect of digitalisation and gave the example of Spain where most tech companies’ CEOs are women. Ms Rancourt observed that today’s technological developments have offered both women and men the flexibility that they need to pursue their careers but also enjoy family life. Ms Nemeikstyte stressed the importance of adapting the education system to the new labour market demands, by exposing young girls to ‘computer science’ or ‘coding’ classes at an early age so that the number of women following such careers is maximized. Ms Chavier underlines the necessity for companies to change practices such as ‘self-nominating performance reviews and promotions’ in order to incentivize women to stay in the field, as “there are 41% of women leaving a STEM position within their careers”. MEP del Castillo strongly supported the idea of making coding compulsory in school, as “a mean of understanding the logic of the computational world.” Ms Crossick also pointed out that ‘unconscious bias trainings’ should be if not mandatory, at least highly recommended in companies and schools.

With regards to future generations, the panel of prominent women professionals underlined the importance of education and development of skills, the implementation of mandatory unconscious bias trainings and the creation of a safer internet environment in order to minimize the gender gap in the technology sector.