On November 7th, EIF hosted a breakfast debate as a preparatory meeting for the 'Internet Governance Forum (IGF)' which took place in Paris between 12-14 of November 2018. 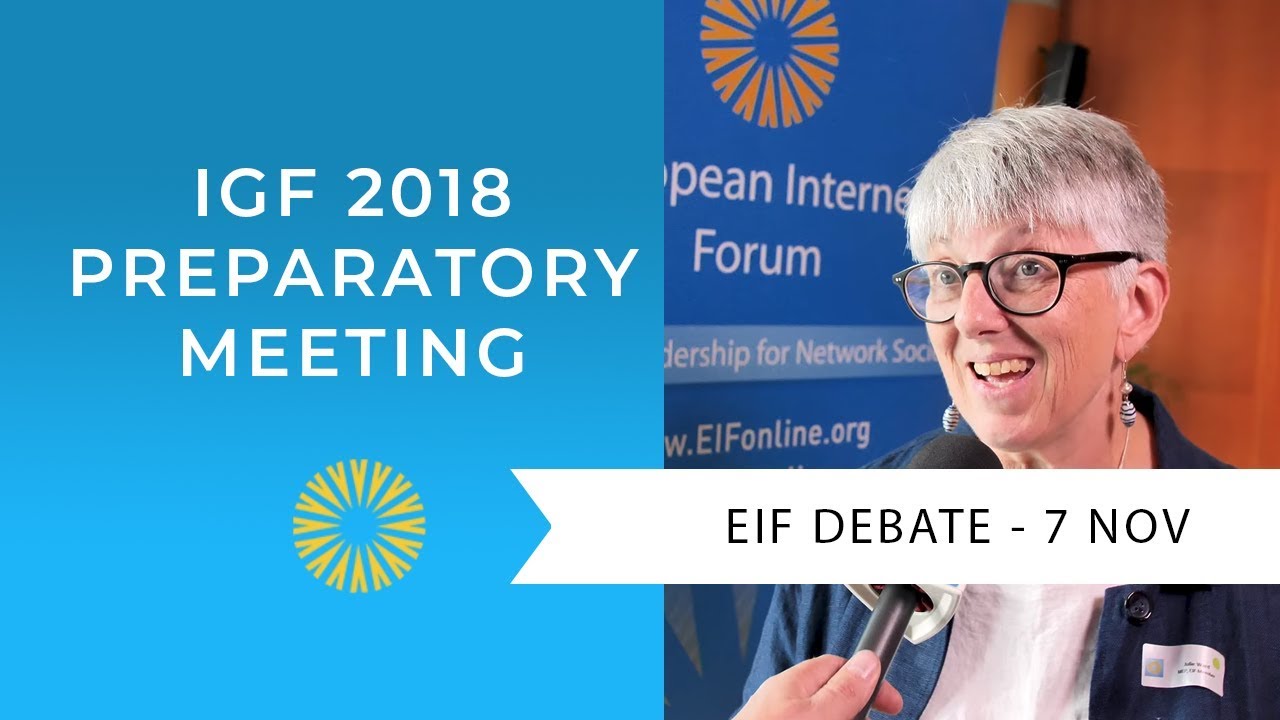 Julie Ward MEP welcomed guests and introduced the upcoming ‘Internet Governance Forum’, highlighting the opportunity that Europe has to build bridges - three consecutive IGFs being hosted on our continent. MEP Ward then pointed out the need for more involvement from the business sector and addressed the role of other stakeholders, notably ‘civil society’.

Sandra Hoferichter, EuroDIG’s Secretary General, seconded Julie Ward’s opinion regarding the opportunity that arose due to the consecutive European IGFs (Geneva, Paris, Berlin) while also highlighting that it comes along with responsibility. In her opinion, this is “a chance to make a difference, to make the outcomes of the IGFs more relevant”. Europe can show insistency to keep the dialogue open even in difficult times, underlying the European values. Ms. Hoferichter then added that a bridge needs to be built between Paris and Berlin and this is where EuroDIG can be one of the pillars. She concluded that the ‘multi-stakeholder’ approach is essential and called for more participation from the business sector.

Arnold van Rhijn, IGF Multi-stakeholder Advisory Group member offered information on the extension of the IGF mandate until 2025 and outlined the need for more IGF funding, in order to strengthen the IGF Secretariat and improve processes, ultimately enabling the forum to come up with concrete results, potentially recommendations that could then be fed to the organisations dealing with the specific topics.

Alessandro Gropelli, Director of Strategy and Communications at ETNO explained what the Internet Governance Forum is for the organization he is representing: a place “for open exchange with all stakeholders”, “to anticipate future debates” and “cooperate”. With regards to the possibility of improving the IGF, Mr. Gropelli joined previous speakers in calling for more involvement from the industry side (especially with the current hot topics of 5G and AI), but also from the government. Moreover, he stated that some good practices of EuroDIG could be implemented to the IGF: the model of bringing discussions from previous editions to the next ones through neutral summaries.

The European Commission perspective was brought to the table by Olivier Bringer, Head of Unit Deputy and Acting Head of Unit ‘Next Generation Internet’, DG CONNECT who acknowledged the fact that the IGF is scheduled at the same time as the Paris Peace Forum, putting the IGF in perspective: “cooperation is needed in order to achieve a peaceful cyberspace.” Mr. Bringer encouraged Europe to use the three consecutive IGFs in Europe as an opportunity to promote and explain the digital agenda, as the European regulatory framework is “probably one of the most advanced in the world, if you look at GDPR, cybersecurity, eIDs etc.” The Commission would also use the participation in the IGF to explain one of its key initiatives: The Next Generation Internet Initiative.

MEP Miapetra Kumpula-Natri, head of the EP delegation to IGF 2018, concluded the debate by stating that the EP was well represented in terms of committees, countries and political groups and that she was looking forward to exchanging views with different stakeholders and taking part in the workshop organized by the European Commission at the IGF 2018.