On 17 November, EIF organised a debate on ‘Digital Tax – what will it mean for Europe's businesses, and for fairness in taxation?’ which focused on the implications for the EU and European SMEs of the OECD Inclusive Framework’s Two-Pillar Approach to addressing the tax challenges arising from the digitalisation of the global economy. The debate, hosted by EIF member MEP Paul Tang, was moderated by EIF Director General Maria Rosa Gibellini and featured the following speakers: 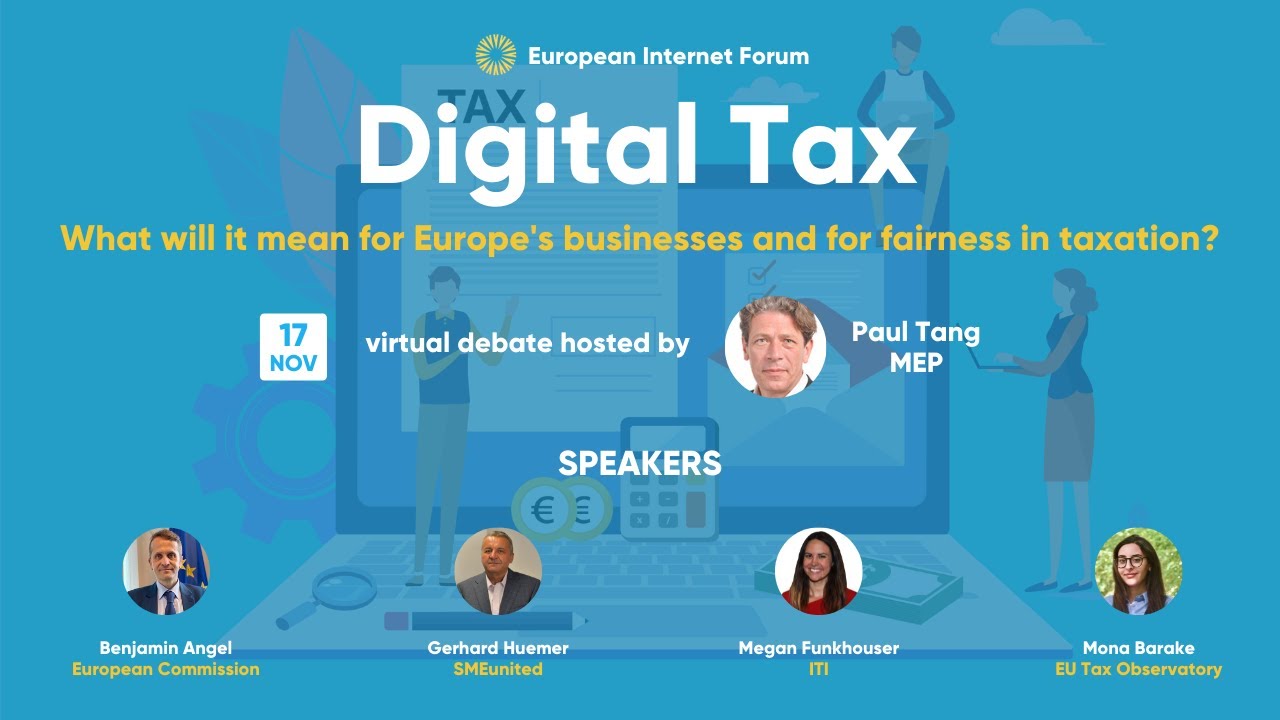 32:16
Digital Tax - what will it mean for Europe's businesses, and for fairness in taxation?

Paul Tang MEP shared his contentment on the agreement reached; this success, after some long negotiations, shows that there is momentum for a change in taxation. Nevertheless, despite having reached an historic agreement, more needs to be done. MEP Tang hopes in fact that this is one in a sequel of deals leading to a better situation for fairness driving taxation.

With the successes we have seen this year, we should not think that we have ended the fight against tax avoidance, added the MEP, which is a fight very much shared throughout the political department, supported by most of the political groups in the European Parliament and national parliaments as well.

Benjamin Angel focused on the sensitivity of the issue of digital taxation. There is a specific difficulty to tax the digital sector and this is why this discussion started three years ago on how to share part of the taxable base between the countries where the multinationals operate.

A lot of work is still needed on the fine prints; everyone now has to work on preparing the multilateral convention to be signed by June. It will have to be ratified before the end of next year, which is a very challenging timeline. As far as the European Union is concerned, the European Commission has put in its work programme a directive transposing Pillar One: this will also indirectly address part of the issue of taxation of the digital sector.

Gerard Huemer speaking on behalf of European SMEs Associations, reiterated that the sector always supported the basic idea of a common consolidated tax base within the EU.
They are quite happy with the current agreement at OECD level: even if it is only a first step in the right direction, it is an important one.

At the same time, SMEs look forward to seeing the proposal from the European Commission when it comes to the implementation. The compromise reached, even if SMEs are not 100% happy with the final solution, is a really big step in the right direction and fully supported by them, declared Mr. Huemer.

Megan Funkhouser explained why Pillar One commitment to withdraw unilateral Digital Services Taxes (DSTs) is so important for companies of all sizes. For SMEs, these online platforms are often the most effective access they have to international markets. A 2021 expansion now means that otherwise offline transactions are brought into scope if a certain aspect of that transaction happens online.

Because DSTs are uncoordinated unilateral measures, the long-term solution is a multilateral approach that updates the existing tax framework to account for how businesses engage with consumers around the world. The October 8 statement makes it clear that DSTs and relevant unilateral measures must be removed for all companies: this means that SMEs will benefit from the withdrawal of DSTs, whether in jurisdictions where SMEs are paying the DSTs themselves or whether they're working with companies that are subject to DSTs.

Mona Barake mentioned three important details about Pillar One which might undermine its effectiveness: (1) the scope (including only on the largest and most profitable multinationals, not necessarily the ones that operate in the digital and the digital sector); (2) it's not a direct tax on the sales or on the profits, but it is going to be a percentage; (3) there is also an issue in the reallocation that might happen (because sometimes when a user is buying online from country X, the sale is not going to be necessarily registered in this country). At the same time, Pillar Two is not necessarily related to the digital market.

Pillar One and Pillar Two are both a first step into allocating market rights to the countries and stopping the competition race to the bottom. But there are details that we need to be careful on when implementing these international reforms.