On 2 December 2021, EIF organised a Preparatory meeting in view of the Internet Governance Forum taking place in Poland from 6 to 10 December 2021. The meeting, chaired by MEP and EIF member Marina Kaljurand and moderated by EIF Director General Maria Rosa Gibellini, brought together Internet Governance experts to discuss how European stakeholders contributed so far to the process of the UN Secretary General’s Roadmap on Digital Cooperation and how to make the IGF more responsive to current digital issues: 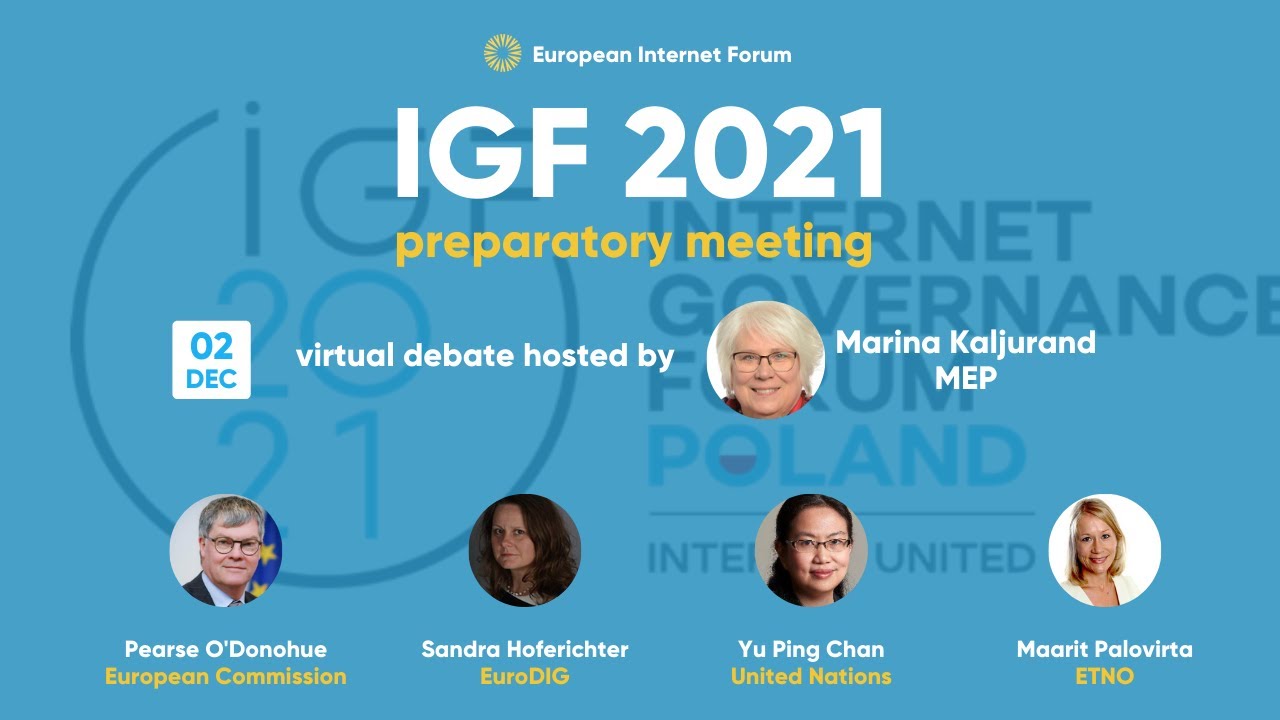 Marina Kaljurand MEP underlined the importance of the multi-stakeholder model; the High-level Panel came up with three scenarios for the future of the internet discussions worth to be mentioned: (1) the IGF Plus model, very important to bridge the digital divide, (2) the fact that IGF is an already established forum, supported by civil society and stakeholders - we just need now more enthusiasm from the government side, (3) it’s gender-balanced and the work with young people is recognised.

There are also some shortcomings, but in general today there is more enthusiasm about the IGF. According to the MEP, there is the need to work more with governments and convince them to come to the table for the future of the internet.

Pearse O'Donohue made a reflection on the implementation of the Roadmap for Digital Cooperation, pointing out two improvements with regard to how the IGF is being viewed: an increase in the inclusiveness of the IGF and an improvement in the responsiveness of the IGF and particularly its relevance to current digital issues. The bottom-up and informal nature of the IGF is one of the things that ensure inclusiveness and a very procedural-oriented governmental type of organisation.

Mr. O’Donohue welcomed the most recent innovations such as the Parliamentary Track, the IGF Plus, the Leadership Panel and the Tech Envoy as good elements to grant more inclusiveness and response and embrace the multi-stakeholder model. This to ensure that it remains an open and free internet, that can help to spread knowledge, prosperity, but also become a point of access to the diverse cultures and the rich heritage in the world.

Sandra Hoferichter touched upon the IGF Plus model and why it is important to involve parliamentarians as a critical group. European stakeholders contributed during the past three years to those two focus areas suggested in the UN Roadmap: the strategic and powered multi-stakeholder High-Level Body and a Parliamentary Track. The involvement of parliamentarians has made significant progress this year, while the multi-stakeholder High-Level Body is meant to bridge the gap between the discussion and the decision.

One of the outcomes of the consultation, pointed out Ms. Hoferichter, is that the body name should rather be describing a more strategic and coordinating role. Nevertheless, the establishment of such a body is a major step forward the IGF Plus model, and this group will really have to meet very high standards and it will be a great opportunity to consolidate the role of the IGF in the future.

Yu Ping Chan recognised that more has to be done: this is what led to the Roadmap for Digital Cooperation which, confirmed Ms. Chan, galvanised the UN action in partnership on key themes such as global connectivity, digital human rights, digital inclusion. On this front, the Secretary General is proposing a Global Digital Compact to translate the Roadmap into a shared agreement, a broader understanding among different stakeholders around these common principles.

Especially in the digital sphere, this is very much needed as new areas of geopolitical clashes arise. Europe has demonstrated a lot of strength and leadership in deliberating internally and bridging different cultures, interests and priorities to reach a harmonised position: there are important lessons and best practices and insights to be gained from Europe.
What we really need is for the IGF to retain its bottom-up, multi-stakeholder nature, but also transmit its powerful messages outwards.

Maarit Palovirta underlined the value of the IGF for the private sector for giving the possibility to share views on the different digital policy issues, to hear other people's views and network. In a European context, it is very important to have a common front to discuss these issues openly and to resonate on how we can open these discussions at the global level; the IGF is a key platform for this purpose and the private sector firmly supports the IGF Plus model.

On the UN Roadmap for Digital Cooperation, Ms. Palovirta shared some contentment and some doubts, welcoming the effort to strengthen the internet governance structures at the global level; at the same time, there is the need to make sure that the execution and the operations on the new reforms are clear for stakeholders to be aligned with. The decision-making and the discussions should become more effective at all levels, without overcomplicating things or fragmentation, nor compromising the democratic structure of the IGF. ETNO wants to continue to be part of the common European front for internet governance and play an active role.