In reaction to the economic and social influence of global tech companies, the need for a European ‘digital public sphere’ which reflects European values is increasingly being voiced.

During the EIF debate organised on 4 November 2020, hosted by MEP and EIF Steering Committee Member Angelika Niebler and moderated by EIF Director General Maria Rosa Gibellini, panellists explored what is needed to create a digital ecosystem able to help European infrastructure, content and innovation to shine and how to support the competitiveness of EU companies at an international level.

The following speakers took part in the debate: 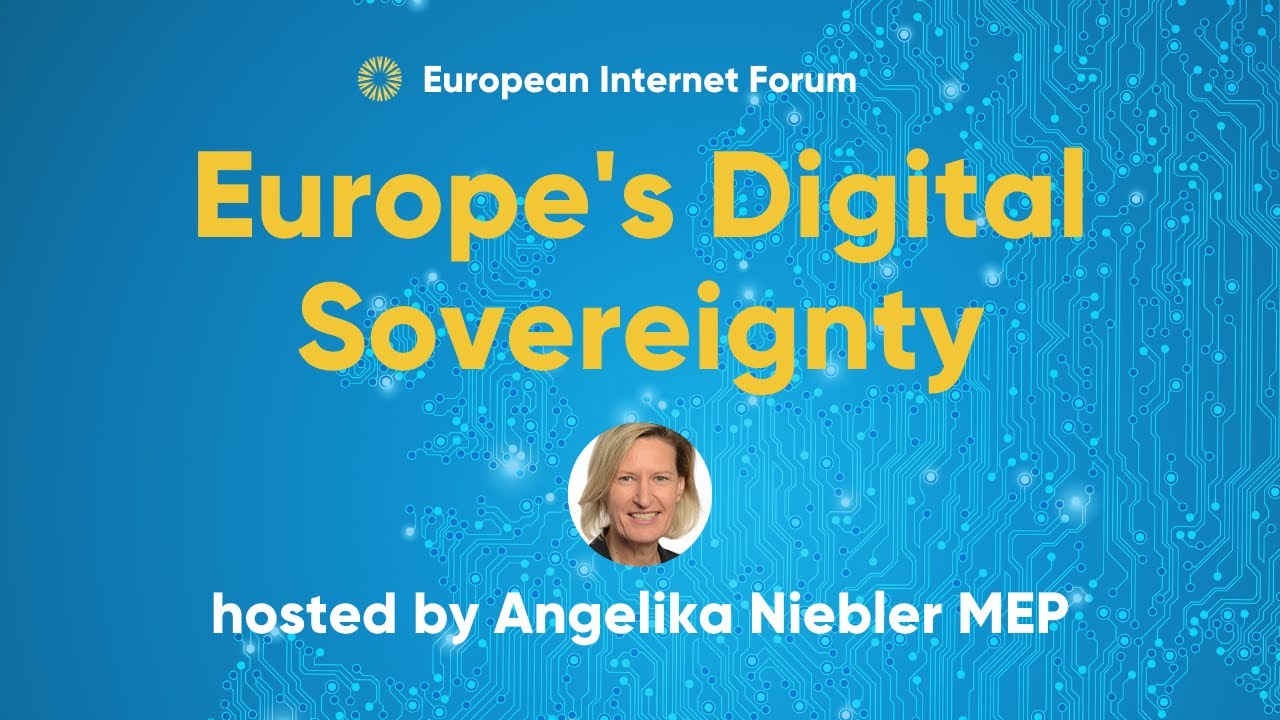 Angelika Niebler MEP opened the debate putting the attention on the fact that a lot of videoconferencing tools that we use to connect are U.S. services. In addition, China is rapidly catching up, faster than the European Union. The consequence is obvious: Europe is heavily dependent on global techs outside the continent.
According to MEP Niebler, digital sovereignty does not mean isolation or protectionism, but Europe must be a player, not only the playing field. Data protection is key for the EU and any regulation or policy needs to be streamlined as much as possible with the European GDPR regime. Ex-ante regulation is needed for dominant market places and the European Parliament is engaged to find the right approach to this matter.

At the same time, Europe has always been also about fair practice, and the idea of a European digital public sphere has increasingly emerged. It is vital for the European competitiveness to launch bold European digital projects; blueprints for ground-breaking projects are already in development (the European data strategy and the European cloud infrastructure, the Gaia-X project).

Ulrich Wilhelm was convinced that this debate was more than timely: the current health crisis makes us aware of how dependent Europe has become on non-European platform operators, from the U.S. or from China. Digital platforms are increasingly penetrating every area and aspect of our life and, at the same time, are completely under private control. Europe is losing its influence over the digital public sphere.
To simply regulate the market is not enough; instead, it is necessary to recreate a functioning market from scratch. Alternative products are not enough; the goal should be to develop a digital ecosystem consistent with European values, conceived as a public service and guaranteeing transparency, fairness, and the protection of private data.

Regulation needs to be complemented by a comprehensive overall digital strategy characterised by modularity, interoperability, openness, and transparency. A governance entity such as a European digital agency, or agency network, together with an alliance of European actors should be established. Government funding should be coupled with European regulation to kick-start the establishment of such an open European digital ecosystem. The key to Europe’s digital sovereignty lies not in its isolationism but in the creation of ambitious alternatives.

Gianpiero Lotito stressed the importance of building a digital industry in Europe through market champions, deep technology and data hosted in the European Union. A condition to support EU champions to grow and have a better continental competitiveness is what U.S. and the Far East made with their champions. There is the need of rules that respect EU tradition, culture and way of life and GDPR is the perfect example. To develop talent attraction policies is also a priority according to Mr. Lotito, because talent is always needed – and hard to keep – in this industry, for every company around the world.

Finally, it is fundamental to develop a clear and incentivized approach to capital and, for the time being, European company evaluation is imbalanced compared to the one in the U.S. or China. Europe needs to promote the digitalisation of all industries to create a digital industry, meaning digital companies in Europe, digital technology made in Europe, and also hosting data in Europe. This is the recipe that will give Europe the possibility to compete at a  global level in the digital future.

Wolfgang Kopf thinks digital sovereignty is difficult to define; what Europe needs is strategic autonomy and reduce dependency on China and the U.S.  At the moment, European companies have about 5% market share in Europe, compared with the 95% of U.S. companies. Europe must play a role in modern digital services. This is the reason why Deutsche Telekom initiated, together with other European companies, the Gaia-X project; if successful, it can be the nucleus for European standardisation and a role model for an interoperable and transparent system of data storage. Nevertheless, regulation at the European level would be crucial to safeguard the whole system.

Mr. Kopf thinks that the most crucial element is ensuring interoperability, access to data, and making sure that abusing market power is limited by ex-ante regulation. There is also the need for a competition law reform enabling European companies to compete with U.S. companies. The recovery money fund, which foresees large sums for basic funding of technology, is a very good starting point and a promising step forward.

Michael Bültmann based his intervention on the perspective of an international company, explaining to the audience why it is relevant for a globally active company to focus on questions like sovereignty: it is about resilience and reducing dependencies. Moreover, with the German government, and orchestrated by Acatech, HERE is setting up a data space where companies can contribute on a voluntary basis and provide data. This will help to see if a business model can be improved or created via the data made available. This system, if linked with the Gaia-X initiative, will give an important contribution, a European way, not a one-country approach.

To conclude, Mr. Bültmann reiterated that there is the need to act carefully concerning regulation: HERE is not against regulation, but it is fundamental to clearly understand the objective. If regulation is too strict and not flexible, there may be an adverse effect, strengthening even further the bigger players in the market.