As part of EIF's ‘Meet the CEO’ series, on 25 March 2021, Members of the European Parliament, EIF Members and guests had the opportunity to virtually meet Göran Marby, President and CEO of ICANN.
The virtual debate was hosted by MEP and EIF Steering Committee member Marina Kaljurand and moderated by EIF Director General Maria Rosa Gibellini. 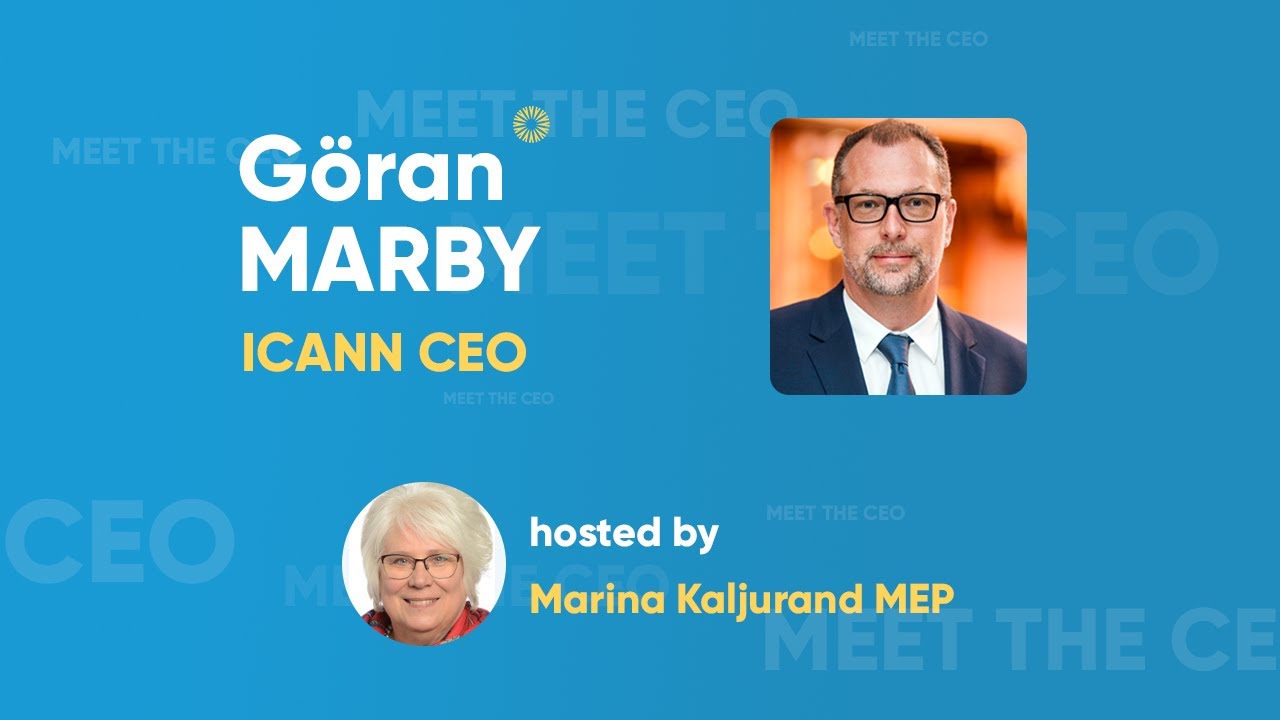 Marina Kaljurand MEP warmly welcomed Göran Marby, praising ICANN for being at the forefront of the coordination of unique identifiers across the world since its creation in 1998.

Before giving the floor to the special guest, MEP Kaljurand briefly presented his career and successes, highlighting Mr. Marby’s ability to be able to speak about technical questions in a language that is accessible to normal people.
MEP Kaljurand supports in particular two of the 2021 goals suggested in Göran Marby’s blog: (1) define and implement a phased plan to return to in-person meetings and (2) to implement a common strategy for internet governance (IG) and technical internet governance (TIG).

ICANN President and CEO Göran Marby took the floor reminding the audience about ICANN’s mission, very much linked to the policy making process and technical work.

The value of working together for the internet

“Every time you go online, regardless of which device or network you are using, or where you are in the world, you are into something that originates from ICANN: we provide the world with the identifiers, especially the DNS identifiers which is the way that internet users connect to each other. We do that as a non-for-profit organisation.”

Göran Marby invited the audience to reflect upon one remarkable aspect of this challenging year: how well the internet has constantly worked and how technology has been stable. This also shows the importance of working all together when it comes to something like the internet and ICANN is only one part of the entire ecosystem.

Another thing that has been interesting this year from ICANN’s perspective is the increased interest from legislators and politicians about what happens on the internet. This is a very positive aspect since, although ICANN is a technical organisation and does not take stances when it comes to policies or politics, this interest and active participation helps protect people’s ability to connect on the internet which is in line with ICANN’s mission.

ICANN’s mission and the role of the internet

Göran Marby’s team does spend a lot of time trying to define what they believe is ICANN’s mandate and what is the internet as they see it. ICANN’s mission “is to ensure the stability, security and resilience of the domain name system or the DNS, so as to continue to allow thousands of networks across the globe to interconnect.”

Keeping the internet a trusted source for everybody

According to Göran Marby it is necessary to continue to evolve and discuss together in order to keep the internet a trusted source for everybody. The abuses of the internet are many, but can be summarised in two different types: when domain names are used for abuse and when someone abuses the DNS system. Unfortunately, over the last couple of years, there has been an increased threat to the DNS system as itself.

When it comes to the Covid pandemic, there have been a lot of speculative registrations around the world in different top-level domains which use the word 'Covid-19'. "Thanks to the protective tools that ICANN already has in place, most of these domain names didn’t become active or were taken down very fast. We do not do all this by ourselves, but cooperating with a lot of other actors” assured the CEO.

The importance of dialogue with governments

Göran Marby highlighted the importance of having conversations with regulators, because “if things are illegal in real life, they are illegal on the internet as well.” He praised the European institutions for the efforts they are undertaking to maintain the trust of the internet and congratulated MEP Kaljurand for the recent conclusions on the Regulation on preventing the dissemination of terrorist content online.

ICANN’s relationship with governments and legislators is to provide technical advice, trying not to take a position on the legislation itself, but to engage in a way to be able to tell if that legislation might have effects on people’s ability to connect to the internet.

The internet is not done

The internet is in continuous evolution; one example that best reflects this never-ending transformation is the WHOIS evolution. In the beginning, this sort of telephone book of domain names buyers (as Göran Marby describes it), had very few domain names; now it contains more than 200 million domains. This technical protocol is going to be replaced with another protocol which will have the same name, he disclosed.
The CEO also precised that the country code operators have their WHOIS systems as well, and the European Commission under eurid.eu domain.

The WHOIS system, outlined Mr. Marby, over the years has become important for law enforcement, intellectual property and for the ones who search the bad actors if a website has fraudulent content.
There are continuous proposals that will change how the internet works: “I think it’s important to protect the model which was able to build a system that is resilient, secure, and works well.”

One remarkable thing about this year is how well the internet has worked. Nobody foresaw what was going to happen, but this one unique resource has been constant. This also shows us the importance of working all together when it comes to something like the internet.