On 11 May 2021, EIF organised a virtual debate on “E-commerce or Digital Trade or both? What’s negotiated at the WTO in Geneva”, discussing the ongoing WTO e-commerce negotiations amongst today’s 86 WTO members and focusing on the range of issues that are under discussion.
The debate, hosted by MEP and EIF Steering Committee member Miapetra Kumpula-Natri, was moderated by EIF Director General Maria Rosa Gibellini and featured the following experts: 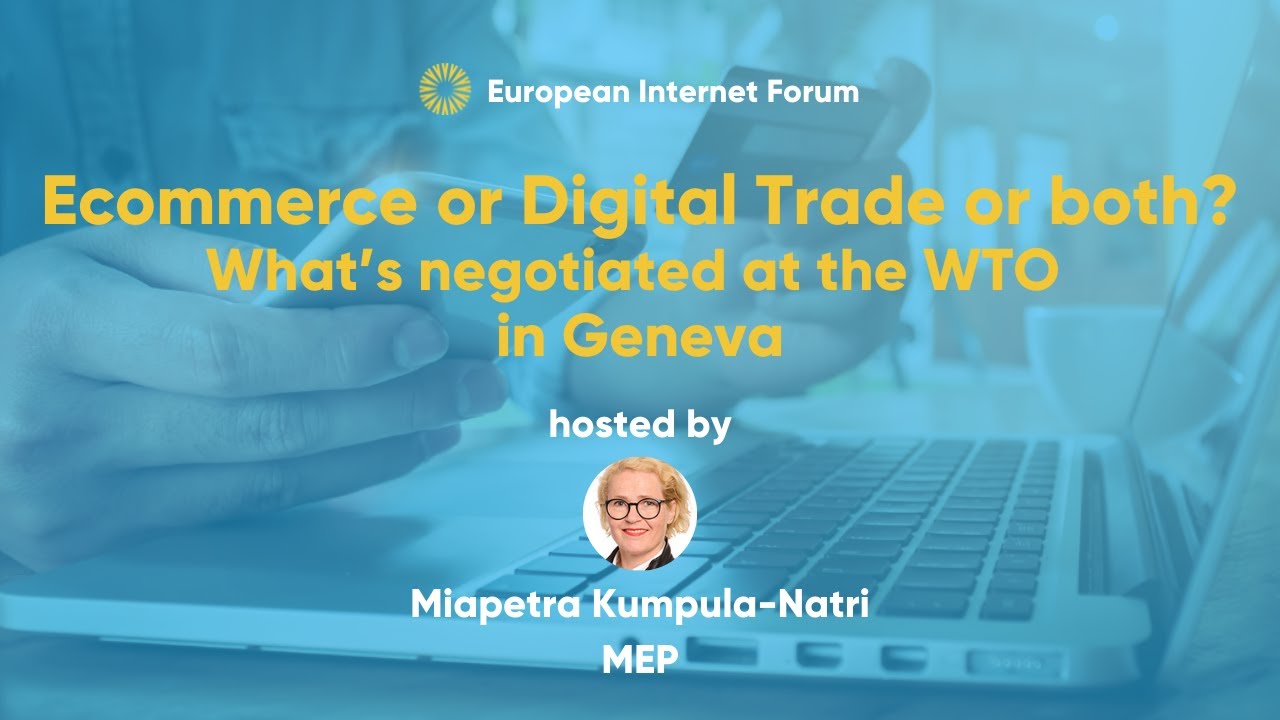 47:56
Ecommerce or Digital Trade or both? What’s negotiated at the WTO in Geneva

Miapetra Kumpula-Natri MEP, Standing Rapporteur for WTO negotiations in the INTA Committee, stressed the support of the European Parliament for these negotiations and the hope for an ambitious and comprehensive outcome. How to regulate the global digital economy is a big question and the WTO e-commerce Joint Statement Initiative is part of the answer, said the MEP. The WTO e-commerce JSI is an opportunity to keep the markets open for digital trading, enabling the new stage of globalisation – more digital and information-intensive – to proceed.

The MEP hopes that substantial progress can be made by ministers at the 12th Ministerial Conference in November. According to Ms. Kumpula-Natri, the negotiations had some good progress, but the most difficult challenges are ahead. The risk of not agreeing on digital rules soon will translate into an increase of new barriers to the digital trade, slowing its growth and causing a huge loss for companies, users and consumers.

Christophe Kiener underlined that the negotiations, since March of last year, had to be held online; although interesting, this format is hindering the progress of the negotiations because happening at a slower pace. At the same time, said Mr. Kiener, “we are gradually entering a moment in which there is the need to start addressing more difficult issues; this is why a solid progress report and a good political message by ministers following the 12th Ministerial Conference in November would be a very good outcome for our work.”

What is key for the credibility of this negotiating process, according to Mr. Kiener, is to take a significant step by the next Ministerial Conference in order (1) to obtain a more streamlined text, (2) to have a joint statement by ministers to encourage negotiators and (3) potentially try and conclude the negotiations by a given date.

Pascal Kerneis underlined the need to bring more countries on board of these negotiations, as the idea is to improve the international governance of digital services. From a business perspective – representing Mr. Kerneis the interests of all services sectors involved in international trade and investment negotiations – WTO negotiations on e-commerce should provide: (1) a facilitation of trade and build digital trust, (2) an improvement of the commitments in regulatory disciplines related to digital services, (3) a permanent ban on custom duties on electronic transactions, (4) the protection of the intellectual property rights, (5) no discrimination against “digital product” and, on cross-border data flows, (6) free flow of data and a ban on localisation requirement.

The European Services Forum hopes that by the end of this year, in the WTO 12th Ministerial Conference, there will be a strong recommendation by the ministers to continue to negotiate and have a streamlined text.

Marilia Maciel provided an overview on how the different countries are positioning themselves in this negotiation process, also taking into account the fact that the pandemic accelerated the shift to e-commerce, but worsened the digital divide. As reported by the World Economic Forum, digital inequality is likely to become a threat to global stability as it is a systemic problem affecting all countries.

Some developing countries did not join the JSI because of: unresolved issues that need to be tackled first, no regulation on the national level or no blueprint to guide negotiators, fear of constraint of the domestic “policy space” and the expanding WTO norm into internet/digital governance instead of trade issues. On the other hand, some developing countries did join the JSI as there is the desire to be rule makers instead of rule takers and to grasp the opportunity to start developing national rules when not yet in place (which is a clear understanding of the functions of the WTO). Some researchers have suggested that some liberalisations such as in data flows will benefit all countries, even those less intensively connected to global data flows. For this reason, Ms. Maciel underlined the need to mainstream development issues in these negotiations to guarantee a fair and balanced result that would benefit every country and help to get out of the crisis.